Your Yoni – Your Sacred Space

I would like to introduce you today to your Yoni. Yoni is a Sanskrit word for the woman's sexual center. It actually means Sacred Space.

I'm Dr. Elsbeth Meuth and I'm the co-founder and director of the TantraNova Institute in Chicago and today it's all about the Yoni. How can we keep our Yoni alive and well, strengthen and tone her in a way that's fun and very effective. I want to go back to the word Sacred Space because that is something we did not grow up with and just imagine if you had learned about your sexual center as a Sacred Space when you were 13, 14 or 15 years old. How may you have started to cherish, respect and honor your sexual center as a Sacred Space? From this day forward, please honor your Yoni as a Sacred Space. 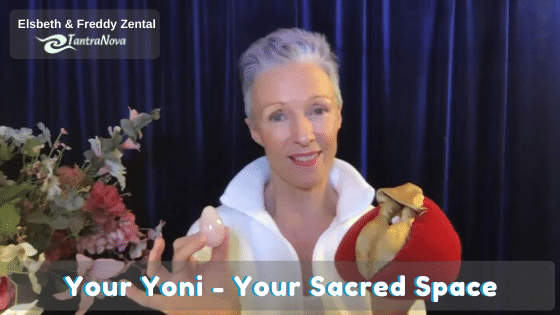 Now, how can we tone and keep our Yoni alive given that the Yoni and the Yoni muscles or pelvic floor muscles are the muscles that hold up all the inner organs that are connected with the bladder? So, we want to have strong muscles that can prevent incontinence in later years. Toned and strong muscles really give us the sense of being grounded in ourselves and by squeezing and releasing these muscles regularly, we connect with our aliveness. Life force energy actually emanates from that area in our base and life force energy is sexual in nature. It is my feminine essence, my feminine energy. When I squeeze and release the pelvic floor muscles, that energy gets activated and assists me in feeling good, feeling pleasant, feeling joy, feeling pleasure.

And this is where the Yoni egg comes in. This particular Yoni egg is made of rose quartz and rose quartz is a crystal that beautifully resonates with the Yoni. It's gentle. It's clear. It's beautiful.

The Yoni egg is being inserted into the Yoni. Make sure that you push it all the way in, not just halfway because you don't want to find yourself when you go out and cross the street, suddenly laying an egg. Wouldn't be so great. Once it's in all the way, you can either just leave it there. I often have it in all day without even noticing it anymore. Once in a while I remember and then I squeeze and release and that connects me to my feminine essence… just in the middle of a workday.

Just by the mere touch of the Yoni egg with the Yoni walls, the nerve endings get stimulated. So, you don't even have to do anything. Just by having the Yoni egg in, it has a beneficial effect. Then when you squeeze the muscle around the egg, the Yoni has something to grasp on. It’s like doing isometric practices or pushups for the Yoni. Then you can squeeze and release the muscle coordinating with the breath so the energy that is being generated through the squeeze & release gets channeled all the way up into your heart and your third eye. It's really a great enlivening practice.

Audio Practice for Your Yoni Training

By the way, you can pick up that audio practice on our product page at TantraNova.com. It's called pelvic floor muscle practice or PC practice for short.

When you are ready to take the Yoni egg out, you push it out and have your hand underneath to catch it. You don't want to lose it in the toilet.

Using a String with Your Yoni Egg

Now there is another option that you can choose, which is to pull a string through the drilled hole in the smaller end of the Yoni egg. In this case you insert the thicker end of the egg into the Yoni and then when you want to take it out, you just pull on the string and there it goes. I personally I don't use a string because if a Yoni can push out a baby's head, a little Yoni egg is no big deal. However, some women really feel safer if they have a string that they can pull it out with.

Caring for your Yoni Egg

To find out more about Dr. Elsbeth Meuth and how you could further learn via her workshops and trainings, go to Yoni Egg and Awaken to Your Feminine Essence